With the advent of machine learning into our IT landscapes, a previously rather academic conflict of the statistical community surfaces in blogs and other forums of discussion every other week. It is the question of frequentism vs. Bayesianism. This debate, often one that is as emotional as the famous editor-wars, is in fact a very fundamental one that touches the foundations of statistics and probability theory. In that sense, it isn’t your usual bike shedding discussion, even if it is sometimes lead as one. Metaphorically, it is a custody trial to determine who may claim the interpretational sovereignty over nothing less than the Theory of Probability.

Frequentism and Bayesianism are both established approaches to statistics. Their differences start, with their core definitions. frequentism treats probabilities as ratios of frequency-counts collected from an infinite number of trials; and frequentist practitioners will tell you that a finite number of trials will also suffice (as in: from 100 coin flips, 50 times we will obtain head, thus the probability for head is \(\wp(H=1)=0.5\)).

For Bayesianists, probabilities are degrees of belief; also Bayesianists use Bayes’ theorem for inference. A Bayesianist would take the probability \(\wp(H=1)=0.5\)

in the coin-flip example above to mean something like "`It is credible, that head and non-head (tail) are results of a coin flip, without one option being more likely than the other’. A programmer can think of the Bayesian interpretation of probabilities as an extension of Boolean algebra: true (1, firm-belief) and false (0, firm-disbelief) are complemented with a spectrum of values \(0 \ldots 1\).

These brief characterizations are already enough to understand much of the criticism either method faces:

This criticism is too simplistic, however. And to those, who strongly associate with one camp, there are probably many embarassing commonalities: Both approaches often lead to very similar results. In this post I will show you how you can solve a problem with both methods and compare the results.

Estimating The Probability for a Bernoulli-Trial

We all expect coins to be fairly balanced. I.e. if we flip a coin, we expect to roughly obtain head half of the times, and tail the other half of the times. Yet there are many processes with two outcomes, where we don’t know the individual probabilities beforehand. For example, a researcher might be interested in the immunization rate of a population.

The questions we are bound to solve are

I divided this section into three parts

A very simple approach to this problem is to just count the number of immunized and the number of people screened. for the above list, we have \(k = 34\) immunized people of a total of \( N = 40 \) people, which leads to an immunization probability of \(0.85\) .

If the researcher had only screened the first 20 people, the result would have looked a bit different, \(0.95\) . If we had only looked at the probabilities from people 20-40, we would have gottten a probability lower than \(0.85\) . Thus, we have a method that gives us immunization rates, yet it heavily depends on the sample size. Also, we don’t have a means to quantify how certain we are about these enumbers.

is the binomial distribution.

We now want to find the \(\mu\) that maximizes the likelihood \(L(\mu)\). We could of course work out the equations by hand. I use sympy here, which will do all the tiresome calculations for us:

Now let’s see if sympy can come up with the derivative with respect to \(\mu\):

Finally, we are only interested in the value of \(\mu\), for which the derivative is zero.

Result: We obtain \(\mu = \frac{k}{N}\) as as the maximum likelihood estimate, which basically is what we expected as the naïve result.

We can use the fact, that different subsets of our data yield different results, to get a better picture of the reliability / variance of our probabilities. Just like above, we will take a look at subsets of the total data set. This time we will take a systematic approach, we will

Distribution of Rates in Subsample 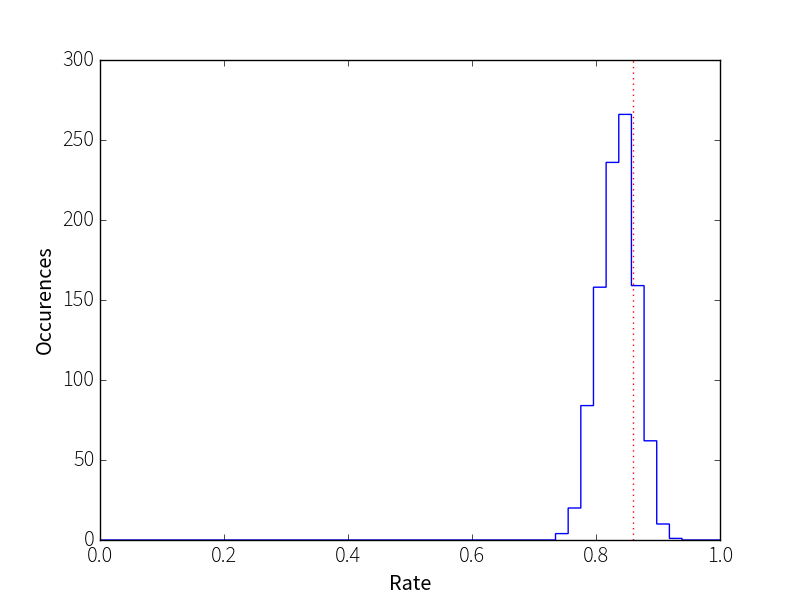 Until now, I think, frequentists and Bayesianists can agree. The disagreement starts on when and how to use this equation. Bayesianists infer (conclude)

on the left side of the equation from the right hand side. Whereas critics of Bayesianism consider this to be a dangerous endeavour.

Bayesian statistics is concerned with data \(D\) and a model \(M\) (a fit parameter, a parameter of a distribution, a quantity that should be inferred). By substituting \(A\to M, B \to D\), we get Bayes’ theorem with Bayesian semantics:

The probabilities involved are:

Why is this important? Because it is often much easier to give an expression for the, than to come up with the posterior \(\wp(M\mid D)\) directly.

The immunization rate \(\mu\) that we are looking for is a probability (in the frequentist sense). Nevertheless, it is in the Bayesian sense also model parameter \( M = \mu \) , whose probability distribution given data \(\wp(\mu\mid D)\) can be inferred using Bayes’ theorem. We would like to find the distribution for this parameter \( \wp(\mu\mid D) \) , so that we can get an expectancy value \(\mathcal{E}[\mu \mid D\)] and the variance.

Bayes rule gives us this distribution. First, we will ignore the denominator, which is more of a normalization parameter, without loss of generality, as \(\wp(\mu\mid D) \propto \wp(D \mid \mu) \wp(\mu).\)

Now we need a suitable expression for \(\wp(\mu)\) . It needs to be a probability distribution that just contains the model alone (no data). This is a tough choice (and one of the main sources for distrust of the Bayesian methods, probably). Luckily, the Bayesian literature tells us, that the Beta-distribution is a suitable choice for this,

Using the above beta-prior model with our collected data, we can obtain posterior distributions for the immunization rate. The following plot shows such distributions, adding more data with each subplot. 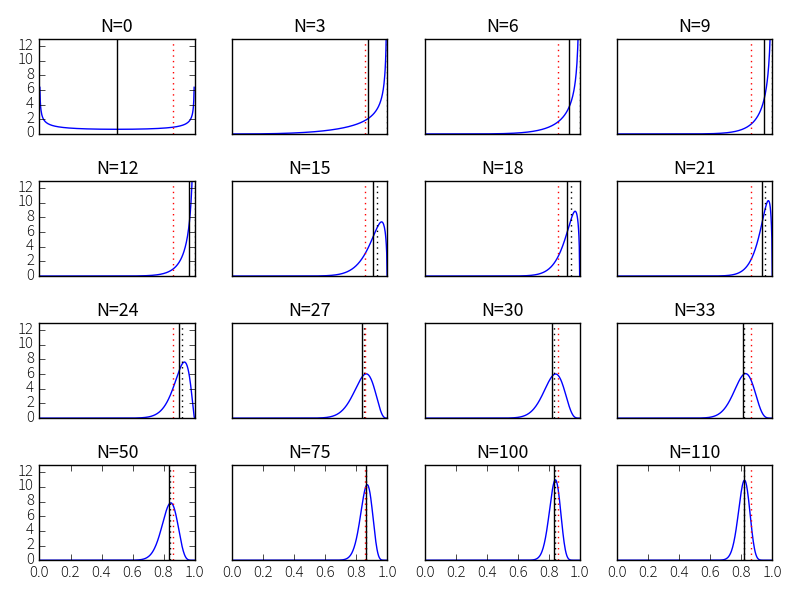 In the plot, we can follow along, how wit hmore data, the distribution gets narrower (i.e. with more data, we are more certain). The first subplot labelled \( N= 0\) is the prior distribution.

The infered value for the immunization rate, \(\mu\), is the expectancy value of these distributions (represented by the vertical black lines in the plot). For comparison, the red, dotted line is the true immunization rate, that we know, because we put it into the random number generator that provides us with the data set.

We can see in the plots, that gradually our estimate changes, as the data fluctuates, although with many measurements it seems to stabilize. The learn curve is a good way to visualize this.

Pretending that we only perform one trial at a time, we can plot a learning curve that shows how our method performs and how the inference quality improves with more data: 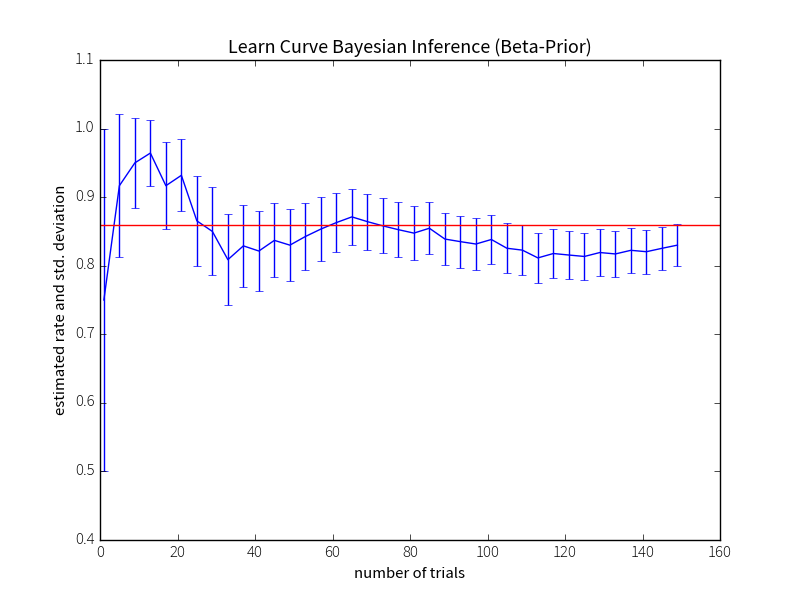 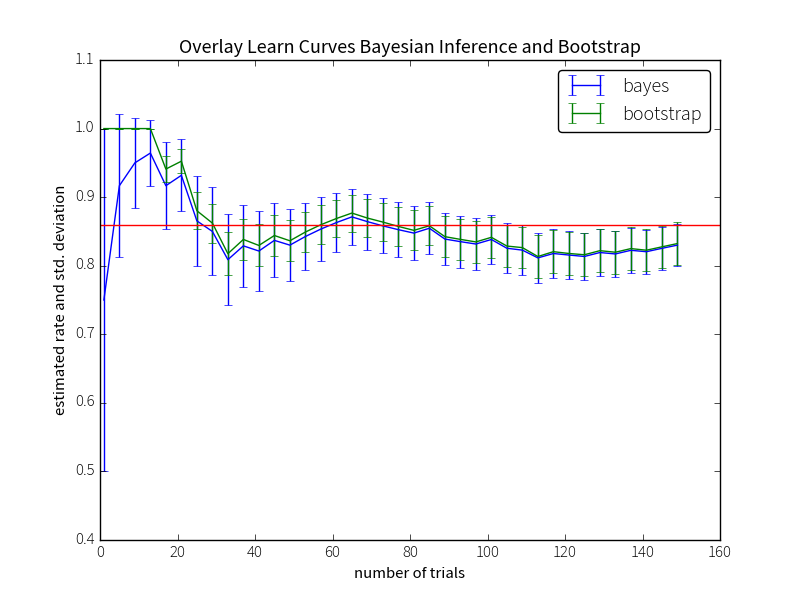 What we can see here is, that with enough data points, both methods give very similar results, to the point where they seem equivalent. However, the Bayesian approach is better when infering from fewer data points. Why is that?

The subtle, systematic difference that remains between the Bayesian and the bootstrap method for larger sample sizes (the Bayesian rate is consistently smaller than the bootstrapped rate) is the influence of the prior, that never completely vanishes (although it is negligible given the statistical fluctuations).

There are many conclusions that one can draw from this simple example. Of course not everything that we can learn from this example generalize to all questions about Bayes and frequentism. So I’ll limit my conclusion here to the one very simple advice: I learned a lot more about statistical methods and algorithms by constantly looking at how Bayesianists and frequentists approach and derive them. Most statistical topics are treated in Bayesian and frequentist literature.

Thank you Christopher and Daniel for your feedback on this blog post.